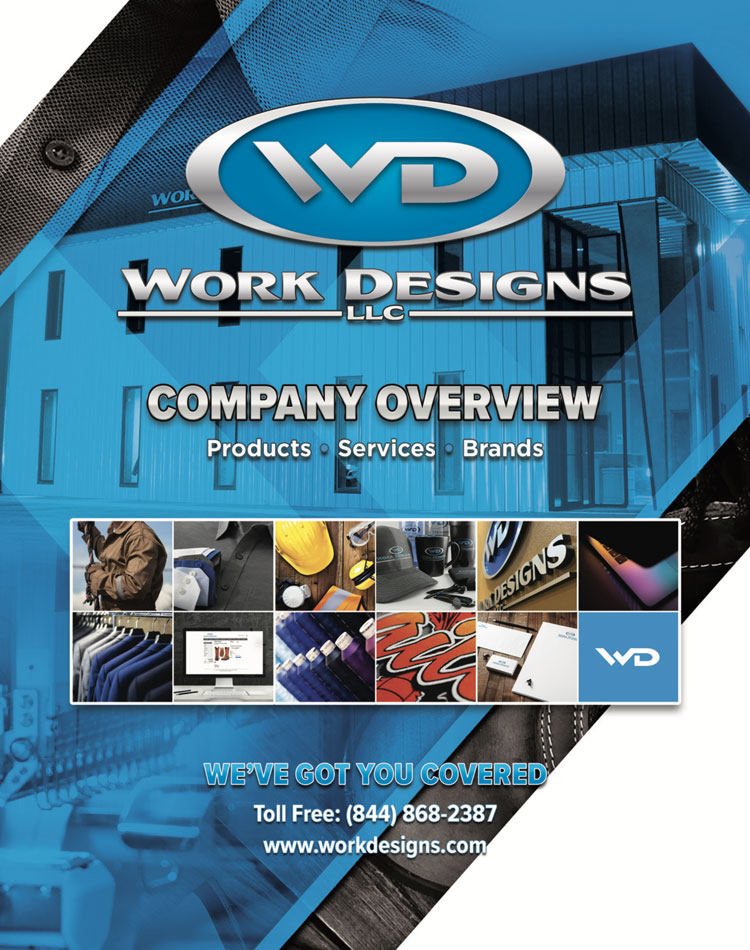 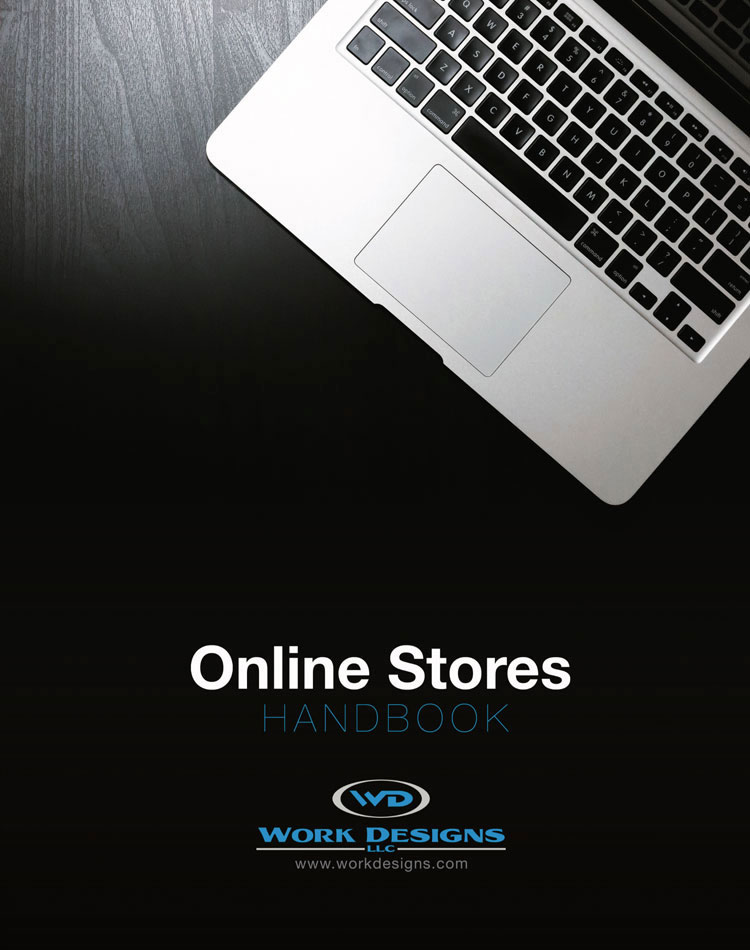 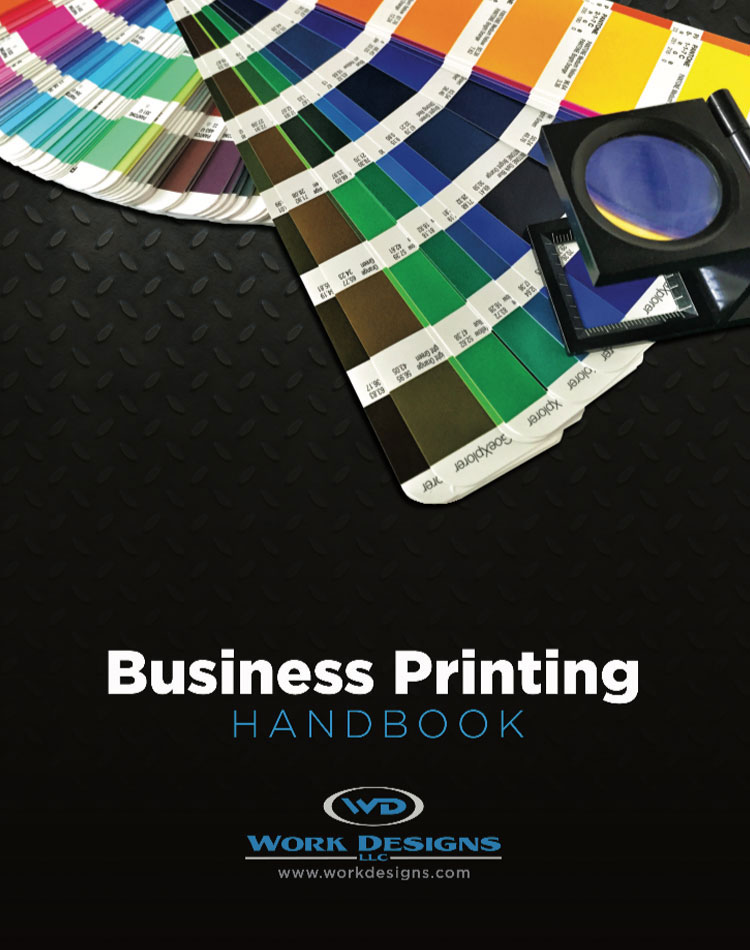 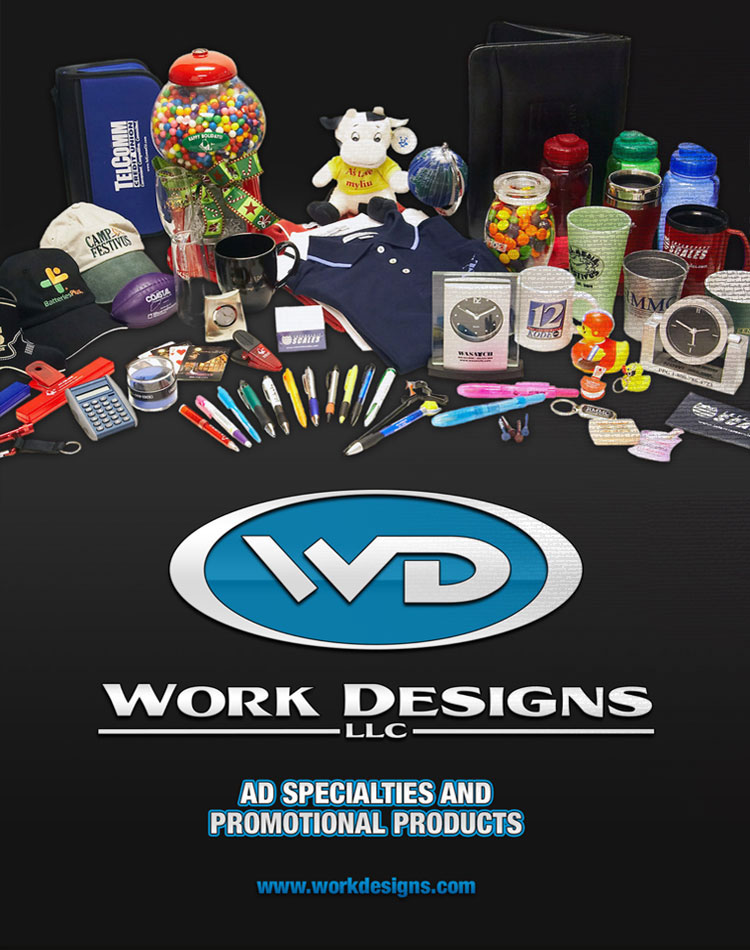 At Work Designs we are happy to work with you in setting up your art files so that you receive the best possible print. We accept just about any standard file type, but we prefer digital artwork to be submitted as editable PDFs. When possible, please size your artwork to the final cut dimensions and include a 1/8th inch bleed on each edge when appropriate. We also ask that you submit all logos and text as vector graphics, that all raster images are at least 300dpi at the final print size, and that all fonts are either outlined or embedded in the file.

BLEED refers to the area of an image that generally extends 1/8th of an inch beyond the final, trimmed dimensions of the artwork on each side. After printing, the final product is cut to size and the bleed portion is discarded. This allows for an image to take up the entire surface of a print, from edge to edge, without a margin.

CROP MARKS are small lines that appear just outside the corners of a trimmed image and indicate where the print is to be cut.

DPI stands for "Dots Per Inch," and is used to measure the resolution of a printed image.

EMBEDDING fonts in your PDF helps to prevent issues resulting from missing or conflicting fonts. If a font is not embedded or outlined, it can sometimes be substituted by a completely different font. In order to ensure that correct artwork is printed as intended, it is necessary to outline the typography or embed all fonts.

FILM POSITIVES are the color-separated images printed on transparent film for masking exposures in the screen printing process. A film positive contains all of the color data for any single color that appears in the artwork.

FOUR COLOR PROCESS is sometimes abbreviated as 4CP or simply called "process." It refers to "full-color" images printed with cyan, magenta, yellow, and black ink (CMYK). Generally this printing method is used for printing photographic imagery or for art that would otherwise require more than four spot colors, as the combination of these inks can produce a wide variety of colors.

HALFTONE refers to the pattern of tiny dots used to create screened tones of colors on plates and screens. Halftone dots range in size and shape depending on the application and process. When juxtaposed, these dots of limited solid colors mix visually to produce a wide range of color in process printing.

KERNING refers to the space between letters or characters. To "kern" is to adjust these spaces for balance and readability.

LEADING refers to the amount of space between lines of type.

LETTER SPACING refers to the average distance between letters or characters.

MARGIN refers to the space between the edge of the page and the boundary of the printed image or text.

MOIRÉ refers to an unintended pattern of dots or lines in an image that can occur from misaligned screens or from making a screen of an image that has already been screen (for example, printing a scanned magazine image in four color process). In order to avoid moiré patterns, we ask that all submitted artwork be original digital files.

OFFSET PRINTING is a method of printing whereby an image is burned into a plate, which is then inked. A roller passes over the inked plate and picks up a reversed impression of the image, which is then reversed again when transferred to paper as the final print.

OUTLINED fonts are vector fonts that have been converted from editable type to shapes in a program such as Adobe Illustrator. Work Designs maintains an extensive font collection, however there are a great many fonts out there and there can be many different versions of any one font. In order to prevent issues with conflicting or missing fonts, Work Designs requests that the type in submitted artwork be either outlined or embedded in the file.

PIXELATION occurs in digital images when the image resolution is too low for the desired output. Pixelation refers to the visibility of the tiny squares that make up a raster image, and most often occurs when a low resolution image is enlarged.

PLATE generally refers to the sheet of metal or plastic on which an image is "burned" and inked for printing. It can also refer to the artwork that will appear on the plate.

PMS is an abbreviation for Pantone Matching System, and refers to spot color printing. Colors are chosen from a book of swatches rather than on-screen in order to ensure consistency. Some PMS colors are named but most are labeled number and often followed by a letter or letters which indicate additional information such as coated or uncoated, for example: PMS 187c.

PPI stands for "Pixels Per Inch," and is used to measure the resolution of a digital image.

PREPRESS is the process of preparing art files for printing and involves all post-design work done in order to get the artwork onto plates, screens, etc prior to printing.

PROOF refers to a sample of the finalized artwork that is submitted to the customer for approval before going to print. Proofs may be printed samples, but generally we present digital proofs in the form of PDFs unless requested otherwise.

RASTER or "rasterized" graphics are digital images, like photos, that are composed of a pixel grid.

REGISTRATION involves positioning an image relative to the surface on which it will be printed (paper, shirt, etc.) as well as the aligning of plates or screens. If plates or screens are not perfectly registered, the print can appear blurry or out of line. Small target graphics or crosshairs that appear outside of the image are usually used to aid in registration, and are referred to as "registration marks."

RESOLUTION refers to the crispness of an image and is measured in DPI or PPI. An image with a low resolution will have visible dots when printed or, in the case of digital art, will appear pixelated. As a rule of thumb, standard resolutions for printed images are between 150 and 600dpi, with 300dpi being the preferred resolution. On-screen graphics are typically more forgiving, therefore the resolution for web-based images is 72dpi. Because of this, photos taken from the internet are generally poor choices for printed imagery.

RGB stands for "Red Green Blue" and refers to on-screen colors used in digital imagery and web graphics. Due to the nature of RGB, special care should be taken in converting colors to CMYK for printing as not all RGB colors can be replicated using CMYK. When designing graphics for print, it is usually best to begin work in CMYK in order to produce on-screen colors that will more closely match printed material.

SANS SERIF translates to "without serif" and references typefaces that lack the decorative lines at the ends of strokes. Sans-serif typefaces are also sometimes called "gothic," and examples include Helvetica and Franklin Gothic.

SCALE refers to the size of an image, and typically to the resizing of the image by a percentage amount while maintaining the same proportions.

SCREEN refers to the dot pattern of an image when printing less than 100% of the ink (eg. a 50% screen). "Screen" can also refer to the screens that are used instead of plates in screen printing.

SCREEN PRINTING is the process we use for printing on shirts and apparel. It involves coating a mesh screen with a photosensitive emulsion and exposing the screen to a bright light masked by a positive film of the design. The areas that are exposed to light become fixed, while those blocked from light by the positive wash away during the "blow out" process. The areas where the emulsion has hardened and not washed away resist ink being pushed through the screen. This means that when ink is pushed though the screen with a squeegee, it only flows through the areas containing an image. Once the ink passes through the screen onto the shirt, it is dried in a high temperature oven. Multiple color prints use a separate screen for each color.

SEPARATIONS refers to artwork that has been separated into the various colors necessary for the printing process. In color printing, the colors in images must be broken down and split between the plates or screens. In spot printing this is usually straightforward, but in four color process printing and simulated process screen printing special attention needs to be paid to screening individual colors so that they mix visually to produce new colors in the final print. We also refer to the process of teasing out colors into film positives as "separations."

SERIF refers to the small decorative lines that project from the ends of main strokes in roman typefaces, such as Garamond and Times New Roman.

SEW OUT refers, essentially, to an embroidered proof and is presented to the customer for approval before embroidering the actual items.

SIMULATED PROCESS is a method of screen printing that tries to recreate the complex color transitions and mixing that occurs in images such as photographs on items such as t-shirts. Due to the interaction of screen printing inks with fabrics and fabric colors, CMYK printing is not always the optimal method for printing this sort of imagery. Simulated process printing tries to pick out the most important colors in an image and, through clever mixing by screening back and layering sometimes more than seven or eight colors, use those to create a range of color options that would not be possible with the standard four color process inks.

SPECS or "specifications" refers to all of the details of a print job, such as size, quantity, number of colors, paper or other print surface, etc.

SPOT COLOR is generally used to distinguish CMYK or "process" printing from prints made with non-standard or pre-mixed inks, such as Pantone (PMS) inks.

STITCH COUNT is a measure of the total number of stitches used in an embroidered design.

THREAD COUNT refers to the number of threads (horizontal and vertical) in a square inch of fabric.

VECTOR refers to graphics that are electronically coded as lines rather than pixels, allowing them to be scaled perfectly without pixelation, Vector graphics are therefore ideal for creating and submitting logos and type. 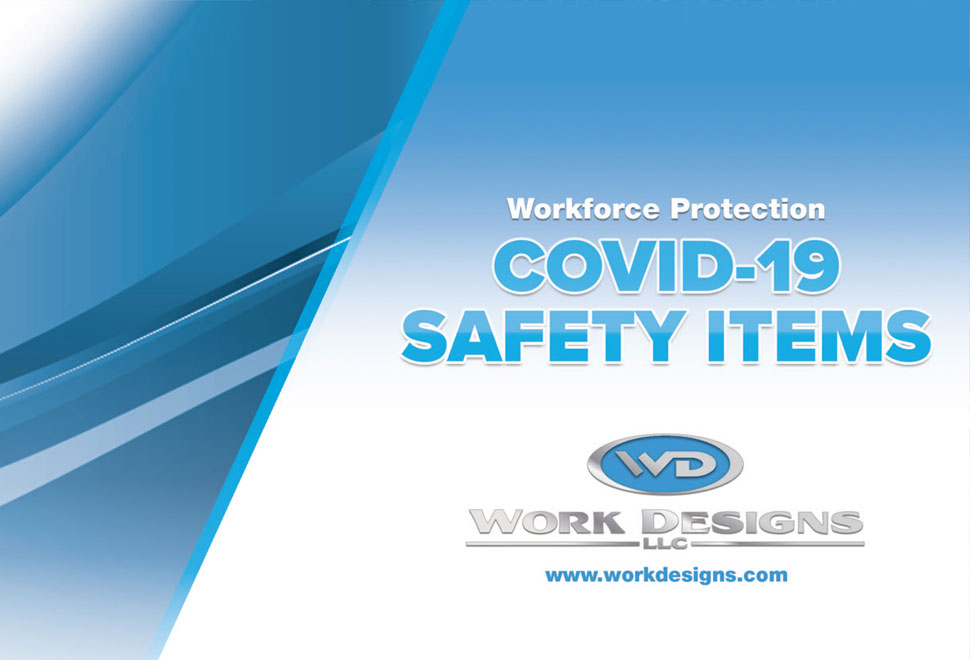 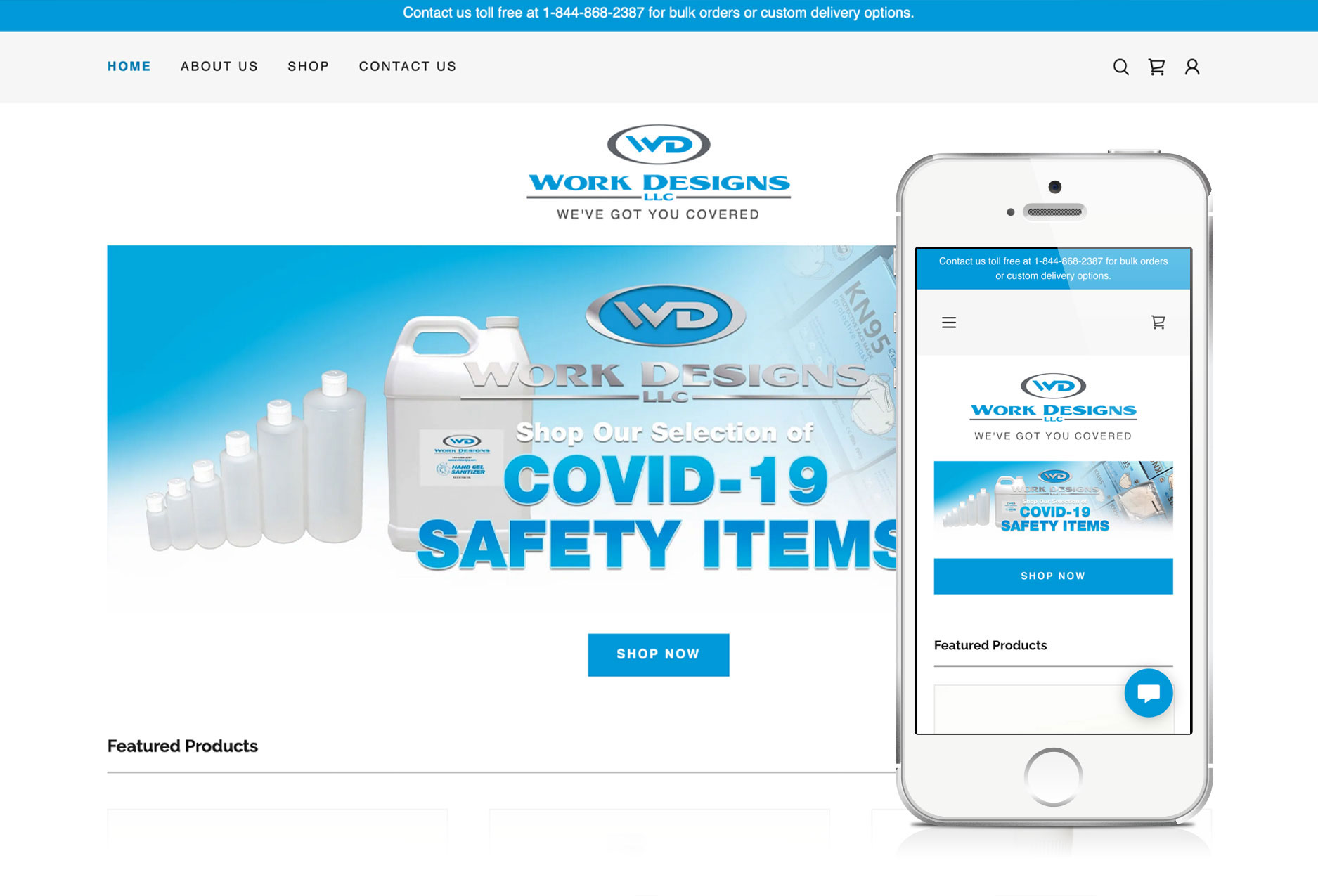 Work Designs is excited to announce the opening of our brand new online store! We currently stock a variety of items to help businesses get back to work during the COVID-19 crisis, and our inventory is growing rapidly.

Get news and special offers from Work Designs in your inbox. We will not sell your contact information and you can unsubscribe at any time

Our offices are open on weekdays from 8:00am until 5:00pm central time.